In Summer 2012, ICC was held under the patronage of the Association Pontes at the High School for the Visually Impaired in Cluj-Napoca, Romania. 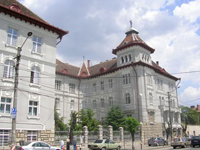 The High School for the Visually Impaired Cluj-Napoca is the first school for blind children in Romania, but it got its current name in 1992. In October 2000, the school celebrated 100 years.

The High School for the Visually Impaired offers high quality educational resources for blind children, and for those children with multiple collateral sensory disabilities. The educational resources are a benefit for children between 3 and 20 years old, who come here from over 20 districts of Romania.
Located in the central aria of Cluj-Napoca, one of the cities in Romania well known for it’s good university development, The High School for the Visually Impaired, distinguishes in compare to other similar schools in Romania, by it’s educational offer, which consists not only in high standard services, coherent with the national governmental curriculum, but also in developing programs as early intervention and one person focused services for pupils with multiple disabilities.

The school hosts the only team of Torball (Football for blind) in Romania, which won the first place at the 2006 and 2008 championship in Switzerland.
The High School has embarked successfully in wide aria European Projects, like, Socrates - Grundtvig 2, Education for adults, Leonardo da Vinci for proficiency, and some others, financed by European Union, projects that lead to a better international communication, improving the degree of proficiency for visually impaired as well.

In June 2007, by obtaining the highest score among all participants in contest, the High School for the Visually Impaired qualified itself as European School.
Currently, the Highschool can prepare candidates for college and university, being subordinated to the District Council.
The school headmaster is Mrs. Cornelia Codreanu, and the deputy Headmaster is Mr. Silviu Vanda.

Powered by Drupal
Developed by Dropthemes.in and Devsaran.